UCI Cycling and RVA – My Experience 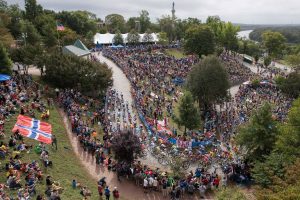 Let me tell you what I know to be true based on my own experiences:

My experience was the Conquer the Cobbles, hosted by Sports Backers and sponsored by Dominion on Friday evening September 25th. About 1,500 active (and not as active) people lined up at Sports Backers Stadium for a chance to ride the UCI Road Course. I was one of those people. I mean how many times in my life will I get to ride a closed, world event race course the day before the event? One of the marketing materials said this is like getting the play Augusta National the weekend before the Masters or Wimbledon center court the night before the finals. That may be overstating it but you get the point. What impressed me was the volume of people lined around the course cheering average people like me along. All down Monument Avenue people were sitting on their steps or standing at the barricade cheering. On Broad Street, Monroe Park/VCU, Main Street, Libby Park Hill was crazy, up 23rd Street both sides were full of cheering spectators. Travel along Governor Street and people were there yelling out words of encouragement…keeping going!! You’re almost there!! I just kept thinking, do they know I’m no one famous? My point? Richmonder’s showed up on a dreary Friday night to yell, scream and cheer for people they knew and even those of us they didn’t. 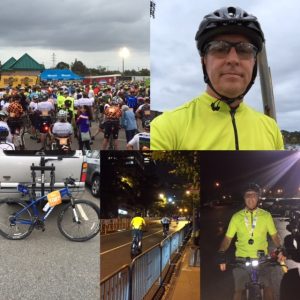 Sunday I returned with my children so they could see this historical event and it was awesome to see hundreds of thousands of people lining the streets of little ole Richmond – the City that Can’t. Well, I’m here to tell you they CAN! If you made it down to watch, you know what I’m talking about; however, if you didn’t you missed out.

What’s my take away from all of this? Don’t let others (especially the media) influence your decision, go see for yourself and then make your own decision. You may be surprised!